SkyWest is home to more than 3,000 Veterans and active-duty servicemen and woman, including hundreds who served in the U.S. Air Force. As we celebrate the Air Force’s 73rd birthday today, we asked a few of our MSP-based pilots to share how their experiences from the Air Force prepared them for working at SkyWest.

Adam Galloway, CRJ Captain, MSP
Galloway is a Major and is a C-130 pilot. When he is not flying for SkyWest or the Air Force, he enjoys working on his Stinson.

Galloway joined the Air Force after being inspired by his grandfather’s stories as a bomber pilot in WWII. He meet his wife his wife when they both were deployed.

Galloway started as a maintainer, and says this background makes it easier to draw the entire picture of what’s going on inside the airplane.

Although Galloway spends a lot of time flying, he says the differences in military flying and commercial flying keep him balanced.

Joining SkyWest in 2013, Galloway said he has enjoyed learning about the inner workings of an airport and all pieces that must be put together for successful commercial flying.

“Flying commercially allows me to meet a lot of new people and visit a lot of places I’ve never seen before,” said Galloway. 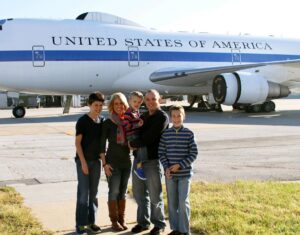 Nelson always loved being around planes while he was growing up and took every opportunity to learn about them. He acquired his PVT, COM, INST, CFI, CFI-ME in 1992 and joined the Air Force in 1994, with aspirations of becoming a fighter pilot.

“Before I knew it, I was 21 and was too old to be commissioned to go through undergraduate pilot training. I decided to take another road to get onto the flight deck…flight engineer,” said Nelson jokingly.

When it came to transitioning from the military to a civilian career, Nelson says that SkyWest was the only airline he interviewed with because he was knew it was the place for him. Four years later he continues to be extremely grateful to be a “SkyWester.”

Nelson doesn’t feel his status as a Veteran makes him stand out more than any other employee, but he does wear his Air Force tie tack with great pride and dignity. He loves working with crewmembers who are also Veterans and enjoys the comradery and friendly banter between the different branches of service.

“When another one of my crewmembers is a Veteran, the flight is like hosting a family reunion, regardless of which branch of service,” said Nelson. “For the most part, coming from the military to SkyWest was a seamless transition.”

Adam Bixler CRJ First Officer MSP
“I am a third-generation military member,” said Bixler. “I joined the Air Force to do my part in serving and protecting our country.” 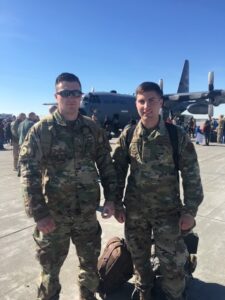 Adam Bixler (right) and his brother

Bixler started his career as a Maintainer with the Air Force and noted that having a maintenance background gives him a unique perspective to the larger operations at SkyWest. In addition to flying at SkyWest, he is also a crew chief on the C-130 Hercules.

“There is an old saying, ‘without mechanics, pilots are just people with cool sunglasses,’” laughs Bixler, who then points to the entire team who makes up a successful flight.

“SkyWest is a family,” said Bixler, “They care about their employees. I have seen this proven many times over, and I intend to continue to do my part to ensure this tradition of excellence continues.”

“I have two of the greatest jobs that I can imagine.” stated Bixler, “SkyWest and the Air Force have each given me many opportunities and experiences for which I am eternally grateful.”

Thank you to Captain Galloway, Captain Nelson, and First Officer Bixler, along with all those who have or are presently serving in our military. We appreciate your service and are glad to have you as part of the SkyWest team. And Happy Birthday to the United States Air Force!