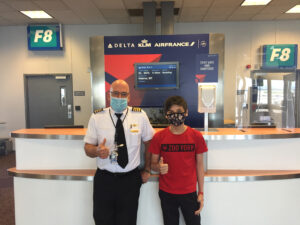 It all started somewhere in the air between Helena, MT (HLN) and Salt Lake City, UT (SLC) when flight attendant Michael Gray saw that Santana, a 14-year-old onboard, was noticeably ill. The young passenger went from looking fine to suddenly appearing pale and in obvious pain.

Michael notified forward flight attendant Julia Jarratt, who began providing updates to the pilots in the flight deck. As they offered assistance and support, Santana’s condition worsened until he spiraled into a seizure.

Upon landing, the crew did everything they could to get the plane and emergency medical technicians to the gate quickly. The crew helped lift Santana from the back to the front of the plane so EMTs could reach him quicker. Michael, along with Santana’s 19-year-old brother on the flight, was able to call the boys’ mother to let her know what was going on. 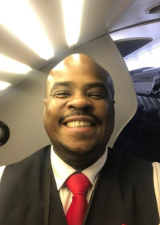 The crew says Santana’s brother was remarkably calm. He knew his younger brother’s health history and was able to help provide care for his brother while keeping his mother informed of what was happening, recalls Michael.

“It was truly a team effort in providing care,” he said.

“Every passenger deserves the best we have to offer because we are there to serve them,” said Julia. “I would want someone to care for and treat my brothers the same way.”

For many emergencies, this is where the story ends: medical personnel take over, and everyone goes on their way. For this SkyWest crew, it was only the beginning.

Santana’s mother (Sarah) would later send SkyWest a message thanking the crew, “Throughout the ordeal, Captain Carroll called me numerous times on his personal cell phone, keeping me up-to-date despite being done with his shift. He took the boys under his wing, giving them Dutch Bros gift cards, water and sharing experiences about a youth group that he’s involved in for my youngest. When I wasn’t on the phone with him, he texted me, literally keeping me from hysteria.”

After Santana was cleared by EMTs to continue traveling home, the boys had four hours before their final flight. Airport Operations Supervisor Rebekah Hales and Capt. Carroll walked them to their departure gate.

“They were not unaccompanied minors but helping them was the right thing to do,” Rebekah said matter-of-factly.

Rebekah then waited with the boys and informed the gate agent of the event to ensure any extra assistance would be available. At the same time, Capt. Carroll made arrangements for another SkyWest pilot — who happened to be heading home as a passenger on the same flight as the boys — to be seated near them as additional support. 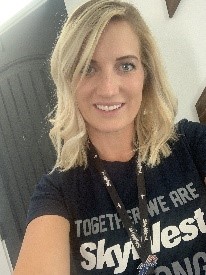 needed,” said Capt. Carroll. Once the flight took off, he also called Sarah to give her an update and provided her with a link to track the flight. Capt. Carroll continued providing text updates to Santana’s mother until they departed.

When asked why the SkyWest team went above and beyond to help the family, First Officer Dave Sagunsky said, “I don’t consider what we did going above and beyond. It’s what we do — we take care of our passengers.”

“I am so privileged and honored to have flown with Pat, Dave, and Julia,” said Michael. “We all came together as a team to help a young man. It truly makes me proud to work with SkyWest and work with an amazing team of individuals.” 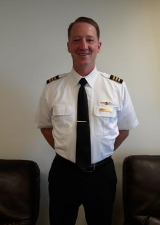 “I’d like to say I’m special, but so many at SkyWest would do the same thing,” said Capt. Carroll.

Santana has since recovered and was able to travel again a month after this event. Capt. Carroll later arranged his schedule to meet Santana at the Salt Lake City International Airport so that he could give Santana a tour of the flight deck.

Thank you to Capt. Carroll, First Officer Sagunsky, Michael, Julia and Rebekah for the incredible compassion and care you provided. It made an unforgettable impression on this family and is a great example of the exceptional service the SkyWest team is known for. 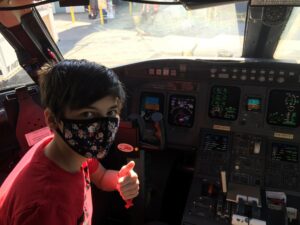