SkyWest’s diverse team mobilizes the company’s values through the service we provide to our customers each day and by giving back in the communities where we live and work. This month SkyWest marked its third year participating in Wings for Autism in Fresno, culminating in our seventh Wings for Autism event of the year.  Wings for Autism mirrors an actual flight experience to help those with autism and other sensory sensitivities navigate and understand air travel.

The company’s long-time partnership with The Arc and the Wings for Autism is just one of the many ways SkyWest provides support for those with disabilities. As an airline that serves millions of diverse passengers each month, SkyWest people expressed their appreciation for this opportunity to introduce the magic of aviation to those who may not have had a chance to fly before.

Pilots, flight attendants and other SkyWest team members who volunteer for these events say they love the opportunity to interact with all those who attend and to share their passion for aviation.

“It’s a great event because it gives the families a chance to get used to airplanes and the airport,” said Flight Operations Supervisor Andrew Johnson. Whether in the air on one of our more than 2,400 daily flights or on the ground for special events, our people do a great job of taking care of everyone.

“I was so lucky, it was just like a normal day driving in a car,” said one participant.

This year alone, SkyWest has helped provide these experiences at events in Boise, Idaho (BOI), Erie, Pennsylvania (ERI), Louisville, Kentucky (SDF), Norfolk, Virginia (ORF), Minot, North Dakota (MOT) and Wilkes-Barre/Scranton, Pennsylvania (AVP). At each event you’ll find a common theme: SkyWest employees giving back and providing an exceptional experience. When asked about her favorite part as a mom, Ida Smith noted that she loves knowing people are coming together to provide valuable opportunities for children across the autism spectrum. That’s why SkyWest is proud to be a supporter of Wings for Autism.

Click here to visit our Careers page where you can learn more about how you can become a part of the SkyWest team and be involved in these types of unforgettable events. 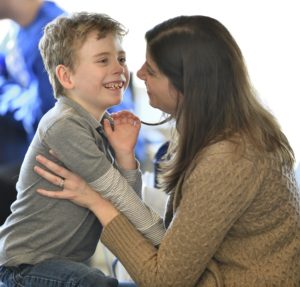 Few things bring as much wonder and excitement to little children as flying on a big aircraft to diverse locations. But for some, especially those with Autism and other sensory sensitivities, this experience is anything but exciting. It can be overwhelming and even a little scary.

To help, several SkyWest teams have recently joined forces with The Arc, the Autism Society, TSA and our mainline partners to host Wings For Autism events. These events allow children with Autism and other sensory sensitivities to participate in a flight rehearsal designed to alleviate some of the stress that they might otherwise experience when traveling by air. The recent Wings For Autism days were held in Louisville, Kentucky (SDF), Norfolk, Virginia (ORF), Minot, North Dakota (MOT), and Erie, Pennsylvania (ERI).

Hours of coordination go into each event to allow for the best possible experience for the children. SkyWest general station managers, along with other key stakeholders, spend months in preparation.

“The true stars of the event were our awesome crews who stepped right in by engaging and educating the families in such a positive way,” said General Manager Vince Bogdanovich. “They were patient, attentive, and helped make many future flyers a possibility.”

“It was rewarding to give back time to those who most need it,” said ORD CRJ Captain TJ Darling. “It was an honor and privilege to help. The kids were so excited to hear about the airplane and interact with the crew. What a privilege it was to share our expertise with such a deserving and grateful audience. It was a way to make others’ lives better and there is no better feeling.” 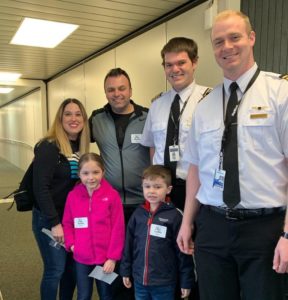 “Navigating an airport is such a nerve-racking experience for everyone on their first time,” added ORD First Officer Kurt Guillan. “To be able to provide an experience for the participants is something all of us involved should be proud of. Knowing I played my small part in helping them gain confidence in a challenging environment is something I take pride in. My crew really hit this one out of the park and showed what it means to be part of the SkyWest family.”

Many thanks to the SkyWest people who volunteered countless hours of coordination and expertise to share their love of flying and provide these families with memories that will last a lifetime! 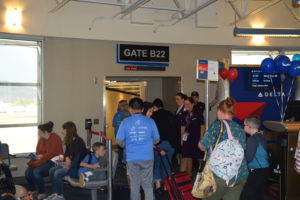 The airport is fast-paced, loud and can be overwhelming for almost anyone. For those with intellectual and other developmental disabilities, it can be unfamiliar and even scary. It is easy to understand why families who have children with such disabilities shy away from the airport.

That’s why SkyWest Airlines teamed up with Boise Airport, The Arc of Boise, TSA and Delta Air Lines, to offer Wings for Autism for some very special passengers.

According to The Arc, “Wings for Autism is designed to alleviate some of the stress that is experienced when traveling by air, the program provides families and individuals the opportunity to practice entering the airport, obtaining boarding passes, going through security and boarding a plane.” 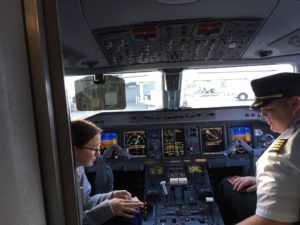 SkyWest has participated in several events helping families with children who have special needs understand and get familiar with airport and aircraft procedures. Time and time again SkyWest crews have gone above and beyond to volunteer their time and resources to help these families.

This past weekend in Boise, Idaho (BOI), that same story rang true as volunteer after volunteer poured into BOI to help The Arc of Boise with their Wings for Autism event.

Whether it was Savanna Son, BOI InFlight Supervisor, talking to each family individually and making them feel welcomed and comfortable as they awaited their flight or ERJ Captain Patrick Persson hosting each child in the cockpit and taking several minutes with each of them to show them the insides and outs of the plane, our SkyWest crew made this a special day for all involved. 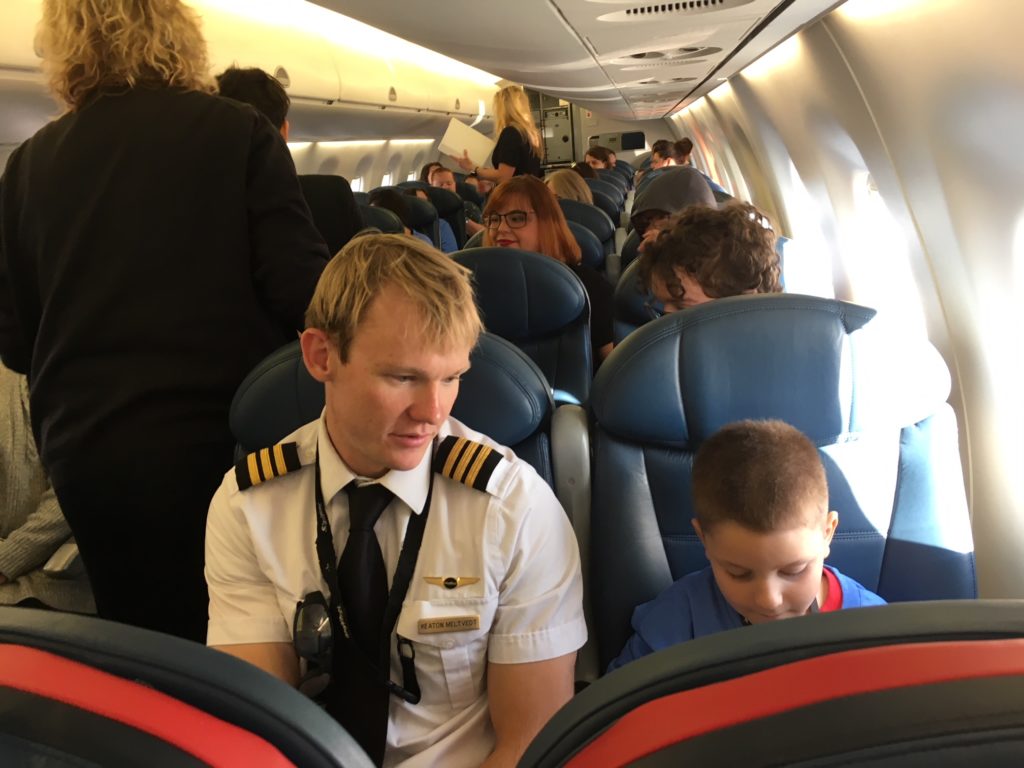 The children boarded a SkyWest E175, complete with a special sendoff from crews lined up on each side of the jetbridge. After a full safety demonstration from the flight attendants, they “taxied” around the airport while enjoying snacks and beverages. They were welcomed back to the gate with high fives and plenty of smiles. 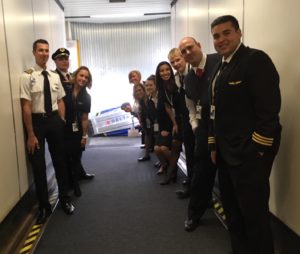 Read more about SkyWest’s partnership with Wings for Autism events.

Many thanks to the SkyWest people who volunteered countless hours of coordination and expertise to share their love of flying and provide these families with memories that will last a lifetime! Interested in joining the SkyWest team? Learn more. 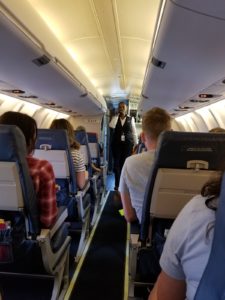 For many, the task of going to the airport, boarding a plane and reaching their final destination is pretty simple. Most travelers have learned that lines and big crowds in the airport are a typical part of the travel process. But for others, especially those on the autism spectrum, and their families, the task of going to the airport can be new and stressful. That’s why SkyWest Airlines once again teamed up with Fresno Yosemite International Airport, The Arc of Fresno, TSA, Delta Global Service and Hewlett Packard, to offer Wings for Autism in Fresno for some very special passengers.

Wings for Autism offers airport “rehearsals” specifically designed to alleviate the stress that children with autism or intellectual/developmental disabilities, and their families, experience when flying.

“Going through security for the first time was a little intimidating,” said SFO First Officer Antonio Puentes, who volunteered at the event. The event was even more meaningful for First Officer Puentes because his son, Mateo, is autistic. “Coming through and you’ve got these machines, and you’ve got people standing around. You’ve got the big conveyor belts. That can be very stressful. And so getting through that with an extra help was a tremendous benefit for them.”

As part of the event, 50 children and their families got a first-hand look at what to expect at the airport and on an aircraft. After checking in at the ticket counter, they were greeted by members of the TSA, who explained what to expect in the screening process. They then gathered at the gate, where SkyWest crewmembers greeted them and talked to each child individually.

The children then boarded a SkyWest CRJ200, complete with a special sendoff from crews lined up on each side of the aircraft. After a full safety demonstration from the flight attendants, they taxied around the airport while enjoying snacks and beverages. They were welcomed back to the gate with high fives and plenty of smiles.

“It’s such a great experience, being able to fly and go new places, and they get to experience that by going through this process first,” said Melissa Perry of the Fresno Yosemite Airport. “They are getting a social story to help them through exactly what they did today, and then they can take that with them when they get ready to go on their [next] trip.”

Thank you to the SkyWest people who volunteered countless hours of coordination and expertise to share their love of flying and provide these families with memories that will last a lifetime! Learn more about joining the SkyWest team.