The SkyWest Pilot Pathway Program provides a direct path for exceptional pilots with a desire to take control of their aviation career! Enhanced seniority, guaranteed final interviews and access to pilot mentors are just a few of the upgrades students can receive by becoming a SkyWest Cadet on your way to becoming one of SkyWest’s nearly 4,000 professional pilots.

We talked to three of our pilots who originally joined SkyWest as cadets – Dylan Girgen, Jordan Torrance and Cullen Burgess ­– about their experience with the SkyWest Pilot Pathway Program, SkyWest’s training, and the journey to becoming a professional SkyWest pilot.

How did you hear about the SkyWest Pilot Pathway Program?

Dylan: I heard about the program through a friend that was in it before me – he was one of the first cadets. I joined because it was a fairly no risk commitment and it allowed me to feel a part of something bigger than just flight instructing. Being a cadet was a nice boost of confidence and drive to finish my hours as a CFI.

Jordan: I heard about [it] through my last job at Transpac Aviation Academy. Several of my buddies stressed the importance of the cadet program, mainly for one reason – you get propelled to the top seniority of your new hire class, and I knew having the edge in seniority was going to be significant.

What was your favorite benefit of being a SkyWest Cadet?

Cullen: It was nice to have an introduction to the company and be somewhat made a part of the team prior to showing up to day one.

Jordan: My favorite thing about being a SkyWest cadet was the advantage in seniority. We bid on our simulator time and location slots, all in the order of our seniority.

Dylan: Being a cadet, it was fun to interact with current SkyWest pilots. The recruitment pilots visited us at UND and took is out for dinner. This let us see the “real side” of someone who works at SkyWest, not just a practiced speech.

How did your guaranteed final interview go?

Dylan: The final interview went really well because we already knew our college representative. The informal dinners were really good for asking questions about what to expect in the interview and the real job.

Cullen: My interview went very nicely – everyone on the interview team was very kind. They were forward with what they were looking for and it made the day a lot easier knowing how it would go. I felt prepared for it. My advice is to study as much as you can. Making an effort to understand the airline world prior to entering shows them that you take it seriously. Knowing systems and regulations that apply are key, as well as things like exemption 3585. For the interview portion, show them that you’re someone they can sit next to for four days. That’s a big key, being a human being.

How was your training experience?

Cullen: Training was fairly straight forward and I felt like the whole teaching staff wanted us to succeed. I knew that there would be a lot of effort required to pass and I had to be willing to put in the effort. If you needed extra help on anything and let them know they were 100 percent willing to help out. That being said, almost everyone who did put the effort in made it through. That’s not something that all airlines can say, people I talk to now from other airlines talk about their dropout rates and they’re much higher than ours. 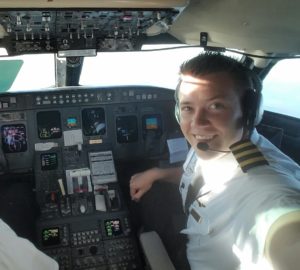 Jordan in the flight deck

Jordan: Training wasn’t too much of a surprise. The ground instructors brief you on what to expect. That, coupled with what my friends had told me, made me feel prepared. The simulator portion was by far the toughest. There are so many things to know, it’s a little overwhelming to say the least. What’s challenging is knowing all the callouts, the profiles, the procedures, learning to fly a new plane and then top that off with the stress of being evaluated on everything you do. It’s not a walk in the park.

Why did you choose to fly with SkyWest?

Dylan: It’s a great company with people that care about each other. I chose SkyWest because they have a huge pilot staff, a large route structure and for these reasons I knew SkyWest was stable and growing!

Cullen: Choosing SkyWest boiled down to quality of training and quality of life. First and foremost I want to fly safely for a safe airline, and then I was hoping to be able to have some high quality of life as well. I could see with the training that there are high standards and I liked that. I also saw the potential for a quality of life prior to coming here; now that I am here the movement is unreal. Very soon I will most likely hold a line in Detroit, which is incredible for only being a couple months in. I feel that SkyWest would be okay in an economic downturn as well, so I don’t fear for my job as others do at other airlines. I would suggest to not to be persuaded to join a company for a bonus or a 6 month upgrade, go where you can learn to be part of the best and in the meantime still enjoy good pay without fear of losing a job as well as enjoy good people to work with!

Jordan: I’ve always heard positive things about SkyWest. The aviation industry seems like it’s in constant turmoil but SkyWest remains fairly constant and treats their employees well. Other regional airlines seem to always be uncertain of their future but the future is bright for SkyWest. We have tons of aircraft and continue to grow. It’s a great time to be in this company! 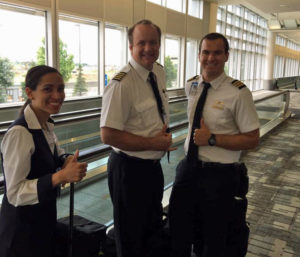 Interested in joining the SkyWest Pilot Pathway Program and becoming a cadet? Apply online at www.skywest.com/pilot-pathway.