In 2014, an estimated 232,670 new cases of invasive breast cancer will be diagnosed in the U.S. and approximately 40,000 women will die from this disease according to the American Cancer Society. And SkyWest people are out making a difference! From participating in walks and fundraising cook-offs to sporting pink awareness attire, our people are taking action to raise awareness and funds to help fight breast cancer.

Julie Bruno, a Denver, Colorado-based flight attendant, shares her story of survival and explains how the diagnosis helped motivate her to accomplish her dream of joining our InFlight Department. The following is Julie’s brave and determined account! 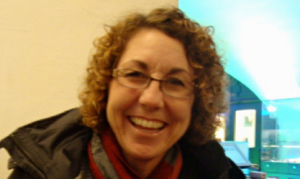 I started my career with SkyWest in Colorado Springs, Colorado as a customer service agent in October 2006. After getting some experience in Customer Service, my plan was to transfer to InFlight in the spring, but I was diagnosed with breast cancer in February 2007.

I will never forget that day. I went for my annual mammogram like I did every year. After the exam, I was told that the doctor wanted to speak with me. The nurse shuffled me into his office and all I saw were my X-ray films hanging on a white screen. The films were lit up from behind as to not miss a single detail. Nothing was said. The silence made my blood run cold. The doctor finally said, “You have cancer.” The only thing I could think to say was, “Am I going to die?”

That day my world had blown up and would never be the same. Things happened so quickly; trying to get a hold of my emotions was nearly impossible. My decision to have surgery and reconstruction was one of the toughest. Over the next seven months, I cried a lot, laughed a lot, loved a lot, prayed a whole lot and found people that have become my very close friends. I look at my world much differently now than before, and with good reason. My family, my faith in God, and a positive attitude got me through my toughest and darkest hours. I told myself that when I recovered I was going to make that jump to InFlight, which I did in August 2007.

I have been cancer-free for more than seven years now, and I would like to share my story with other women and their families who have experienced breast cancer. Many of us and our families (mine included) have been touched by cancer. We can benefit from each other’s personal stories which give hope and encouragement for a bright future. I hope we can all take this month, and every month, to bring awareness to breast cancer research and prevention.