For some, aviation runs in the family! We reached out to Chicago based First Officer Tristan Mazzu to share how her father – also a pilot – encouraged her aviation career.

To say I grew up around aviation was an understatement. An American Airlines pilot for a father and Delta Air Lines flight attendant for a mother made the aviation world an inevitable part of life.

Sometimes on Sundays, Dad would wake me up early in the morning and buckle me into the right seat of our Cessna 120 taildragger. It was important that it was a Sunday, because the FBO a few towns over had donuts on Sunday mornings. Some of my oldest memories are flying in that little Cessna to get Sunday donuts. The best flight of my whole life is in that taildragger with my dad.

When I was younger, I had a burning desire to go to a hot air balloon festival. As the day approached, I was told we couldn’t go. Naturally, I threw a tantrum and locked myself in my room. Dad came upstairs and informed me that he needed to gas up the airplane. Despite arguments that it wasn’t Sunday and that I was mad at him, I ended up buckled in the right seat of the Cessna. After a flight of silence, I saw something unusual outside of my window — a hot air balloon. The sky turned a million colors as the sun set and hundreds of balloons took flight below us. I gave the biggest smile to my dad as I realized nobody else would experience this moment in the same way. I think that was when I realized I preferred the air over the ground. 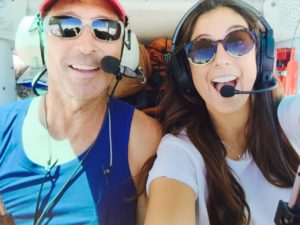 When I turned 18, I finally got enough sense to take a flight lesson. Having never pushed flying on me, Dad was ecstatic that it was something I chose to do. The hereditary aviation gene, plus a bite from the flying bug, made becoming a pilot my new dream and passion. Shortly after this epiphany, Dad swapped his trips around, and we spent a whole weekend visiting aviation colleges all across the country. I transferred to Utah Valley University within the next school year to become a full-time aviation student, and the rest is history.

There was not a single moment in pursuit of my dream without my Dad being a part of it. Every time I moved back and forth across the country for aviation, he was the one who helped me stuff my car full and drive wherever I was headed next. I was struggling with landings? Dad was there to encourage me and talk me through each step. I needed help studying for my checkride? Dad spent hours quizzing me about everything under the moon, from Airspace to Zulu time. 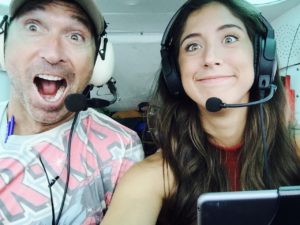 I’m skeptical that Dad may love his Cessna 120 more than me, so I’m quite honored to be the only one he’s allowed to solo it! Before I started my first job as a flight instructor, my dad and I took a big trip together in ‘Planey’ (original name, I know). It was my 21st birthday present to pack up the little taildragger and fly it on an epic cross-country trip to Oshkosh. We started in Texas, stopped by my first flight school, drifted up the Appalachian Mountains toward Maine, hopped over the border into Canada for the night, crossed back through the Great Lakes and then spent three nights in a tent under the wings at AirVenture.

One day at work, I received a text from my dad to look out the window. We had just parked at our gate, and I looked up to see this dorky guy in a pilot’s uniform waving at me. Dad had walked all the way from the L-gates on his sit, and picked up my favorite food on the way so we could hang out during my turn. He even took me to sit in the 787 flight deck. I don’t care how long you’ve been flying, that will always be cool.

It’s so cool to be working in the airline industry together! A jumpseat meet up has yet to be arranged, but I assure you, it will be happening soon. My goal is to fly a jet with my dad someday before he retires. If my little brother could join in on that flight, that’d be even cooler.

My dad inspires me, ‘plane’ and simple (sorry for the bad pun). He’s the kind of pilot I want next to me in an emergency, and who can grease a 787 on the runway like nobody’s business. If you met him or flew with him, I’d bet you’d agree with me. Not only does he inspire me as a pilot, but also as a person. I admire his pursuit of passion and his tenacious work ethic. He taught me how important hard work is and to never give up on my dreams. He has never failed to encourage me in whatever I pursue and is my biggest advocate. I know I would not be the person I am today without his endless motivational speeches, constant love and undying support. I am so proud and blessed to be his daughter and to be following in his footsteps.

Happy Father’s Day to all the amazing Dads out there, and especially to you Padre! I love you!

Happy Father’s Day to our SkyWest people helping to inspire the next generation of aviation professionals! We’re grateful to fathers like Tristan’s for inspiring her to join the SkyWest family of aviators.