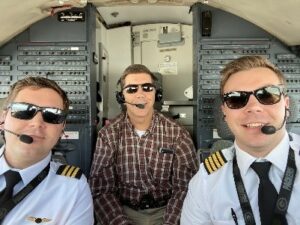 Flying is in the DNA of Evan and Lee Broadbent. The brothers came to SkyWest over three years ago and are both based in MSP. Evan is a CRJ captain and Lee is a first officer on the CRJ.

Their father, Lance, was a Marine pilot flying RF-4s. After his time in the military, he was hired by American Airlines and finished his career as a check airmen and FAA designee on the A320.

“Growing up around aviation and seeing what a cool job he [Lance] had, it was a pretty easy decision to follow in his footsteps,” said Lee.

“My dad is the reason why I chose this career,” said Evan. “He is my biggest role model.”

Due to the COVID-19 pandemic and the resulting decrease in passenger demand, Lance decided to take early retirement from American. As a result of this early departure, he never got the opportunity to enjoy a celebratory final flight. Evan and Lee decided they might be able to help recognize their dad and put together a surprise that none of them will soon forget.

“It was by far the coolest day in my aviation career,” said Lee. 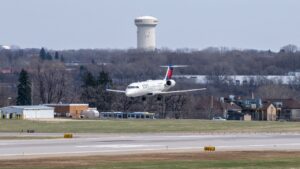 After finding a flight from Minneapolis (MSP) to Bemidji, Minnesota (BJI), Evan and Lee coordinated with ATC and the team on the ground in BJI to help recognize their father. Then, they invited their dad to fly with them in the jumpseat. It was something the trio had attempted in the past, but last-minute schedule changes prevented it from happening.

“[A few months ago] he had told all of his friends he was about to ride with us. When it didn’t work out, he was fairly upset,” said Evan. “To say the least he was absolutely stoked to ride with his sons.”

The flight started routinely, and Lance had no idea what was planned. However, as they took off, he began to learn this was no ordinary flight.

“When we first took off, before the tower handed us off to departure, the tower congratulated him on his retirement,” said Evan. “At that moment, he knew something more was happening.”

Throughout the flight, ATC passed along their congratulations to Lance as they checked in with each facility. When they arrived in BJI, the flight was greeted with a water cannon salute and the airport team presented Lance with a congratulatory bottle of Champagne as he deplaned.

“To have my brother as the captain and our dad in the jumpseat – I can’t put into words how special this was,” said Lee

“He was in shock and borderline in tears,” said Evan.

Both brothers reflected that this unique flight was an amazing experience and a special day for their entire family. 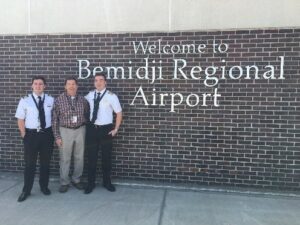 “It was just very cool we were able to make this day happen,” said Lee. “To see the smile on his face meant the world to me.”

“I looked back at him just before pulling into the gate and I could see all of the emotion in his eyes. That was a special and heavy moment,” said Evan.

Thank you to all the dads like Lance for being such great role models and inspiring the aviators in their family to follow their dreams!