It was one of the most amazing acts of sheer kindness she had experienced in a long time – her family’s own Christmas magic. That’s how Jaimi Nielson described SkyWest flight attendant Erin O’Shea’s actions after Jaimi’s son, Owen, left his bag at a gate in San Francisco before boarding a recent flight.

A prized collection of LEGO sets, his “best friend” (a well-loved stuffed lizard) and favorite storybooks were among the possessions that five-year-old Owen accidentally left in SFO. After realizing what happened, he was heartbroken and cried the whole flight.

The Nielsen’s searched for a way to retrieve the bag, but what they found wasn’t good. The bag had to be picked up in person and the cost of a flight to reclaim the items would cost well over $1,000. 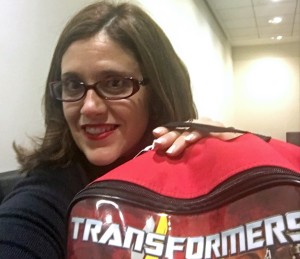 Erin met Owen while he was flying from San Francisco to Salt Lake City and offered to help. After she finished her trip with a flight to Chicago, Erin jumped on a different flight back to San Francisco, rather than flying directly home to Salt Lake City. In SFO, she was able to work with TSA to ensure all the security requirements were met and picked up the bag. Erin then flew back to Salt Lake and delivered it to Owen’s family.

“We asked her why she would be willing to do this,” Jaimi explained, “and she simply said, ‘Because he captured my heart.'”

Thanks to Erin’s quick thinking, Owen was overjoyed to find his most treasured possessions back at his side when he woke up the next morning.

But Owen wasn’t the only young boy who experienced some holiday magic this month. More than 1,000 miles away, in Minneapolis, five-year-old Ethan and his younger brother were on their way to live with their Nana in Duluth, Minnesota. There were sure to be a number of changes in store and the one thing Ethan really looked forward to was snow.

Having lived in Mississippi, Ethan had never seen snow before and he couldn’t wait to get to his Nana’s house to have a snowball fight! When his flight from Minneapolis to Duluth was delayed due to weather, he couldn’t help but feel disappointed. Ethan told Linzie Clayman and Jacie Vonada – Minneapolis-based SkyWest flight attendants all about his plans for the snow. But as the hours passed by, Ethan’s excitement turned to frustration.

“Their Nana looked pretty stressed out,” Linzie said. “When the snack cart rolled around, Jacie and I helped her get some snacks for the boys, but Ethan still seemed pretty sad.”

That’s when Linzie and Jacie concocted a plan – a secret mission to make Ethan’s day special.

They talked to the first officer for the delayed flight, and within a few minutes, he returned with a snowball, just for Ethan. 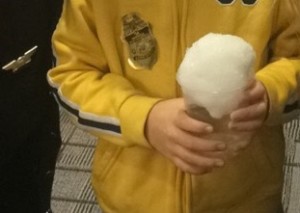 Ethan’s whole face lit up at the sight of his first snowball. But he wasn’t the only one. Other travelers around the gate area saw the exchange and couldn’t help but smile as Ethan carried his snowball around until it melted. That simple act of kindness helped keep Ethan’s spirits high until he was able to arrive at his new home.

The actions of Linzie, Jacie, Erin are repeated by countless other SkyWest employees on a daily basis as they work to provide incredible customer service for every passenger, especially during the busy holiday travel season.