SkyWest cross utilized agent Bob Gilkerson has spent most of his life in Pierre, South Dakota, but his recent act of small-town kindness attracted some big-city attention in Albuquerque, New Mexico. 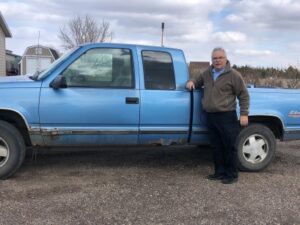 Last month, a passenger visiting family in Pierre (PIR) was dropped off at the airport and realized he had left his wallet at a relative’s house. When the passenger was unable to reach family members, Bob loaned him his 1996 blue Chevy pick up to go retrieve it.

“Pierre is a small town and we are used to doing those kinds of favors for each other and I didn’t think much of it at all,” said Bob.

He joked with the passenger not to scratch the truck and the man was able to make it back to the airport for his flight. The passenger turned out to be a television reporter in Albuquerque and he posted the story of the misplaced wallet and loaned truck on his Facebook page, generating more than 4,000 shares and a catchy hastag #BeLikeBob.

“The incident we are referring to is very common with Bob,” said PIR General Manager Steve Lang. “Bob likes to help where ever he can.”

Steve describes Bob as enthusiastic and friendly, someone who is always engaging with customers, and gives excellent customer service.

“This is not the first time he has lent his truck to a customer or employee in need,” reported Steve.

During last hunting season, Bob loaned his truck to a passenger who came to the airport without the proper locks for his gun case. He was able to buy the needed padlocks and get back to the airport for his flight.

“I didn’t think too much about it,” Bob commented.

Bob’s philosophy of providing thorough customer service began as a child while observing his father, who ran office equipment, and was honed over years of customer focused work as a UPS driver and in insurance.

“Nothing happens without our customers,” said Bob. “So, when I came to SkyWest as a part-time retired guy, I just brought along that philosophy of customer service with me. I know what it’s like to be on the other side of the counter with no clue as to what’s going on.”

Bob uses that empathy to make the interactions with customers more personal than what they may typically experience and to offer comfort and encouragement. Bob became a cross utilized agent with SkyWest a little over a year ago when the PIR station opened. He likes the variety of the job, which has a little bit of everything, and praised his airport operations team.

“It’s short and sweet, but intense during the two-hour shifts,” said Bob. “I think we’ve got a pretty good squad here in Pierre with Steve Lang leading the team. We all get along pretty good and I think it runs well.”

Outside of work, Bob and wife, Joanna, enjoy spending time with family, including their 10 grandchildren.

“I’m in grandpa mode,” said Bob. “I help relieve those pressure points when the kids need a babysitter.”

Thank you, Bob, for your great example of being #SkyWestStrong by helping others at home and at work.