As part of Asian American and Pacific Islander (AAPI) Heritage Month, we are excited to highlight some incredible employees we have working here at SkyWest. This includes people like Bruce Chang, a SkyWest A&P mechanic in Colorado Springs. Bruce says his SkyWest journey actually began before he was even born.

“I enjoy being at SkyWest because of the community I experience and the way we embrace diversity here,” said Bruce. “SkyWest started from humble beginnings, similar to my family’s story.”

During the Vietnam War, Bruce’s parents boarded a plane with other refugees in the jungles of Southeast Asia and came to America. They were among the first Hmong people to enter the U.S. The new culture was a shock, and learning the language and how to drive made their new everyday routine difficult to navigate. But his parents knew the challenges would pay off for their five children here in the land of the free.

Bruce’s father loved aviation. Bruce remembers looking over his large collection of aviation books and watching him build airplane models. His dad also took the family to air shows every year and loved being near all aircraft. Bruce’s great uncle actually maintained and piloted helicopters, like the Bell UH-1, during the war and Bruce’s dad hoped to do something similar in the U.S. Ultimately, Bruce’s dad had to choose a different path to provide for his family.

After graduating high school, Bruce was excited to continue helping his family find their brighter future. His parents had encouraged him to seek higher education and a career like a doctor, mathematician, or an engineer. Several years into college, Bruce realized those careers were not for him. He discussed his circumstances with his dad, who remembered his aviation dreams as a young adult. His dad enthusiastically told Bruce about his earlier dreams and their family history in aviation. He also noted there were few Asian people in the aviation industry and encouraged Bruce to look into the field.

Thankfully, there was an AMT school and a SkyWest maintenance hangar nearby. Knowing how proud it would make his father, Bruce followed his father’s advice. Bruce and his dad went and met with a school counselor, toured the facility, and talked with the director. Bruce enrolled that day. Thanks to the hard work that his parents instilled in him, Bruce graduated Valedictorian and as the head of the diversity club. After graduation, he applied at SkyWest and the rest is history.

“Now, I look back and think about how my ethnic background has influenced where I am today,” said Bruce. “The overwhelming challenges my parents faced and the experiences we had empower me to move forward.”

Bruce knows being Asian American helps him better see the beauty and worth of cultural differences and accept them.

“I believe I can bring value to this world like my parents did,” said Bruce. “I think I can still make a positive difference. It’s easy to be passive and let the world around pass by, but I choose to be different. Being Asian American has helped open my eyes to this perspective.”

Bruce is excited about people of all ethnic backgrounds entering the field of aviation. He has enjoyed watching the positive change over his 11 years as a mechanic at SkyWest.

“My coworkers acknowledge my Asian American heritage rather than ignore it,” said Bruce. “SkyWest is a company that values diversity; it is apparent in their acknowledgement of AAPI month.”

Become a part of our diverse team by visiting our careers page!

SkyWest talks with one of our maintenance professionals who reflects on his aviation career and what Black History Month means to him.

Reggie Teague, an A&P professional at SkyWest, is coming up on his 20th anniversary and has no plans of slowing down anytime soon. The Houston-based maintenance supervisor has worked across the country and throughout the SkyWest system working on advanced aircraft systems, troubleshooting and doing inspections to help keep SkyWest’s fleet running smoothly.

As we celebrate Black History Month, the veteran A&P mechanic says he is grateful for the opportunity it provides to recognize and reflect on the contributions of those – both past and present – who have made difference.

“I’m proud of my heritage and appreciate those who fought for equality and who helped pave the way before me,” Reggie said.” My parents are my role models. They didn’t have it easy and they worked hard to make sure I had what I needed to succeed in life. If it wasn’t for them I wouldn’t be the man that I am today.” 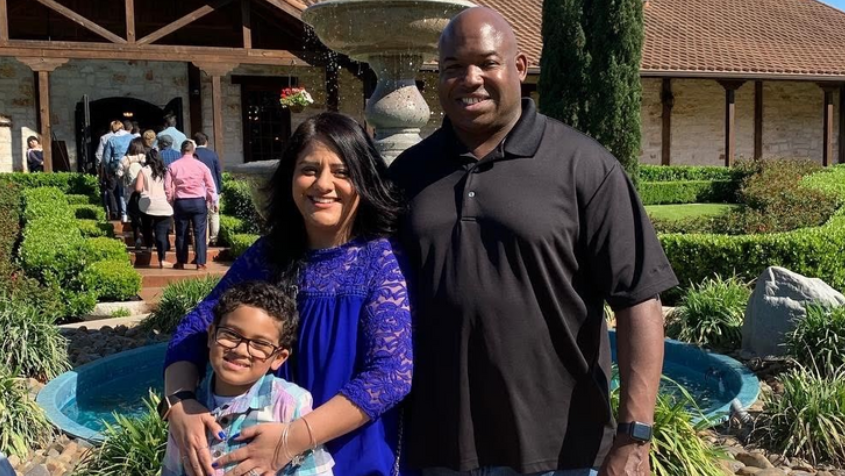 Those lessons and traits have shaped Reggie’s fun-loving personality and a big reason why he’s made a lasting impression on all those he meets, especially his coworkers.

For Reggie, SkyWest has always been his ‘home away from home’ and the company’s family-like environment has helped him feel included and supported from the moment he started. That camaraderie was on full display three years ago when Reggie broke both of his legs and was away from work for several months. The challenging time was quickly filled with love and support as current and former SkyWest employees kept checking up on him.

“I had people who I hadn’t worked with in years calling me and asking how I was doing,” he said. “A bunch of employees even donated their hours to help me. I’m forever grateful to them. And that’s what SkyWest is all about. We are a family and everyone has big hearts!” 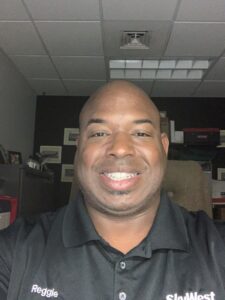 While Reggie has had other opportunities at mainline carriers, he says the connection he shares with the company has made staying with the airline an easy choice.

“SkyWest has always stuck by my side and they gave me a chance when everyone else closed their door,” he said. “My experiences here have been nothing short of amazing. I have made strong lifetime bonds with people in the SkyWest family. These are just some of the reasons that I never think about leaving. It really has been a great blessing to work here and I look forward to many more years to come.”

From working on jets to turboprops, Reggie has done it all. And what makes Reggie’s story so intriguing is that it nearly didn’t happen.

Before joining SkyWest in 2001, Reggie worked as a hotel manager in Houston, Texas. He recalls pilots and flight attendants checking into the hotel talking about their fun trips or upcoming vacations.

“I was jealous. The only perk I could get was a free hotel stay,” Reggie said jokingly. “Hearing them talk about their trips got me interested, but I didn’t want to be a pilot or a flight attendant. I’m a guy who loves to build things, take stuff apart and then put it all back together.”

After a friend told him about the option to be an aircraft mechanic, Reggie was sold.

“I looked into it with my mom; we did some research and I decided to do it,” he said. “I enrolled and successfully completed A&P school in 18 months, then started applying to a bunch of airlines.” 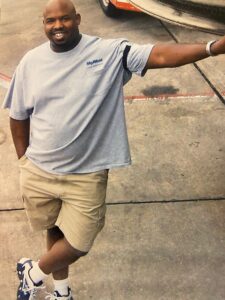 With interviews at regionals as well as major U.S. airlines, Reggie was just excited to get started. Then the unthinkable happened: 9/11.

“When 9/11 happened, airline recruiters were calling me and letting me know that they were going into a hiring freeze. I was crushed. I said to myself, ‘that’s it. I’m not getting hired,’” he recalls. “Then a little bit later that day, I received a phone call from SkyWest and at that point, I just figured I was going to get the same reply as I got from all the other airlines. But I was wrong. They surprised me and offered me a aircraft mechanic position in Salt Lake City. I told the hiring manager that all the other airlines called me that morning and told me they were on a hiring freeze. The hiring manager replied, ‘We know, but we really want you’ and that has always stuck with me.”

After accepting the offer and moving to Salt Lake City, Reggie became the first in his family to work in the aviation industry, completing the trifecta of his parents and grandparents working in the transportation sector.

“My dad worked on cars and my grandpa worked on trains. Since I work on planes now, our family has the whole transportation sector covered,” he said smiling.

SkyWest is proud to celebrate Black History Month and appreciate the contributions of all those like Reggie who help make the airline the best in the industry.

So, you’ve caught the aviation bug! We don’t blame you. We love airplanes too. So we invited Tom Himka, Colorado Springs Maintenance Manager to give us an overview of what it’s like to be a SkyWest Mechanic.

Starting a new career can be a bit overwhelming, and you probably have plenty of questions. For instance, what is it like being a SkyWest mechanic? We can tell you, there isn’t anything more exciting than working nose to tail on state-of-the-art aircraft. And that’s exactly what every A&P mechanic at SkyWest does. With safety at the forefront of every task, each mechanic is responsible for the miracle of flight. Our team of maintenance technicians uses the best technology to keep a fleet of nearly 500 aircraft safe in the skies. 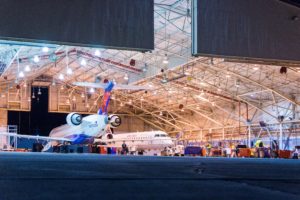 I’ll share an overview your first night, week and year as a SkyWest mechanic. We look forward to seeing you at work on the hangar floor.

Your first night at the maintenance hangar starts by attending a pre-shift meeting with all mechanics. Here, you’re assigned a Crew Lead, team and the aircraft you will be working on. Maintenance Crew Leads oversee 3-4 aircraft, plus one heavier inspection aircraft. All work must be wrapped up and the aircraft positioned to head back to the gates by 4:30 a.m.

SkyWest’s approach to teaching about the different aircraft is a mixture of hands-on and classroom experience. You can expect to spend 3-4 weeks on the hangar floor with the aircraft and an on-the-job trainer. You will also attend familiarization classes for each fleet type.

To help with the steep learning curve of your first week, you will meet with a Designated Trainer. A Designated Trainer is a top-level mechanic who works with Inspection and Production, and will specifically train you on SkyWest’s policies, procedures and SkyTrack computer maintenance documentation. The Designated Trainer acts as your mentor and coach as you work through assignments and sign-off tasks. 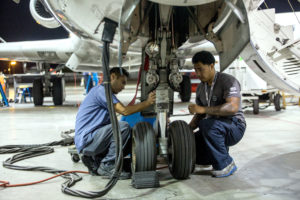 Your first month, you’ll be hands on the aircraft with walk arounds, learning component locations, and inspection trainings.  For the first 30 days, FAA regulations require all work to be signed off by a trainer.

During your first year, you’ll continue class training for each aircraft type and module classes for specific systems like hydraulics, fuel or air conditioning.

Our Accelerated Training Program is designed to ensure top proficiency within 18 months, allowing the flexibility to work independently as well as lead or assist new mechanics.

Already have your A&P? Apply here! 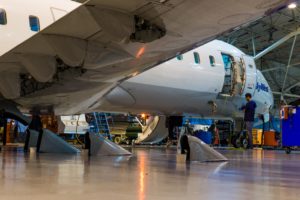